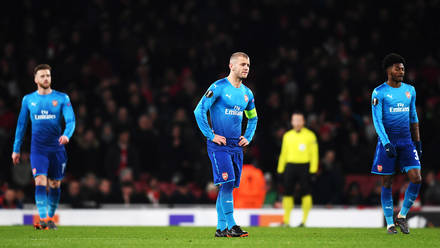 The gunners lost against Ostersunds yesterday 1-2 after a very poor display against the Swedish team and gunners midfielder Jack Wilshere was disappointed in himself.

The English international was among the players which the manager decided to start in the lineup against the visiting team from Sweden but the Arsenal had an awful performance as they lost 1-2.

Jack Wilshere has said that the visitors deserved the win, here’s what he said;

“Yes, I think so. Especially in the first half. We were nowhere near good enough. We improved a little bit in the second half but it still wasn’t good enough.’ He told arsenal.com last night.

‘We’re through and as you said, that’s all that counts. We’ll see who we get tomorrow and then we’ve got a big game on Sunday so we’ve got to refocus now on that.”

The English midfielder says that he hopes that him and the rest of the squad members will now need to refocus on their next target which will be the EFL Cup final which takes place on Sunday.

Breaking News: Arsenal Team They Will Face In Europa League Round 16 Revealed

Report: The Possible Teams Arsenal To Face In Europa League