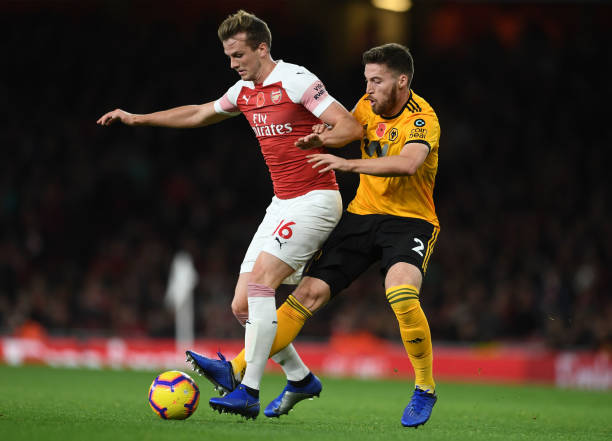 ( Arsenal Vs Wolves / Photo via Getty )

Arsenal has made a 1-1 draw with Wolves thanks to a late equalizer from Henrikh Mkhitaryan. The gunners came into this match with confidence because they had made an impressive 1-1 draw with Liverpool last weekend but Wolves surprised them after Calaveiro took the visitors into the lead thanks to a mistake by Granit Xhaka.

The gunners tried to get back into the game after they conceded but failed to create any goal scoring chances in the first half hence the first 45 minutes ending 0-1 in favour of the North Londoners. Mkhitaryan equalised for the gunners in the second half and the match ended 1-1. So let’s take a look at the talking points about this match.

ARSENAL LOOKED CLUELESS IN THE FIRST HALF

To be honest, the Arsenal team underestimated Wolves so much and thought that everything was going to be served on a silver plate, one could easily see this because the Arsenal players weren’t showing any intensity in trying to look for a goal and just looked relaxed.

Looking at the goal by Wolves, Xhaka made a weak pass which was intercepted hence putting pressure on his team to look for an equaliser. Arsenal’s performance against Wolves was very bad.

MESUT OZIL IMPRESSES ONCE IN 5 MATCHES

I know might seem like a bit harsh towards Mesut Ozil but the truth is that the German international hasn’t had a great performance in the last few weeks like he did against Leicester City. The match was very tough for him because it had a lot of pace and the pressing by Wolves stopped him from doing his magic for Arsenal on Sunday.

LONDON, ENGLAND – NOVEMBER 11: Alexandre Lacazette of Arsenal crosses under pressure from Connor Coady of Wolves during the Premier League match between Arsenal FC and Wolverhampton Wanderers at Emirates Stadium on November 11, 2018 in London, United Kingdom. (Photo by David Price/Arsenal FC via Getty Images)

UNAI EMERY GOT IT RIGHT WITH SUBSITUTES

Alex Iwobi played the first 45 minutes of the game but didn’t play the second half because Unai Emery brought in Matteo Guendouzi so that they could make use of the flanks to create chances, I think it worked out quite well because the gunners looked more dangerous in the second half.

In the last minutes of the game, the gunners brought in Mkhitaryan and Ramsey in the positions of Ozil and Kolasinac. Even though Aaron Ramsey didn’t make much impact but he didn’t make any noticeable mistake. Mkhitaryan became Arsenal’s saviour as he scored the equalising goal.