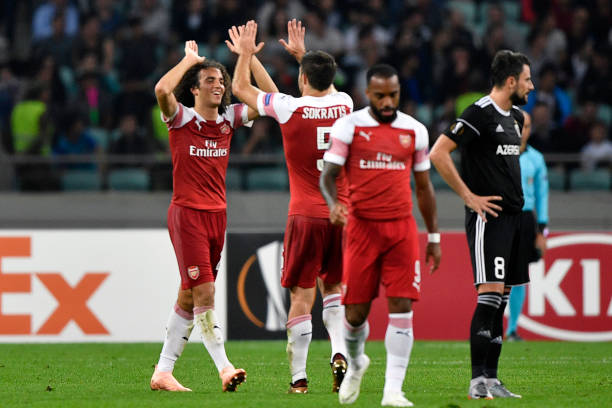 ( Qarabag Vs Arsenal / Photo via Getty )

The final UEFA Europa League group E fixture sees group leaders Arsenal and 4th placed Qaarabag stand-off in a game that really has little at stake except if Arsenal lose by more than 3 goals and Sporting win by at least 2 then the gunners would slip into 2nd position. The first match at the Baku stadium saw Arsenal take the day by 3 goals to nill therefore It’s unlikely to see a different turn of events this time around.

The home team has suffered several defensive loses through injuries giving the manager a hard time selecting the backline. Qarabag on the other hand would like to finish with a strong performance and exploit Arsenal’s defensive frailties. The Azerbaijan outfit have enjoyed some fine form scoring 11 goals in the last two games in the Azerbaijan Premier League and are currently 2nd in that league. They won’t be shy to shoot.

Team news from Arsenal indicates that they are still without the services of the impressive Rob Holding who has been ruled out for at least 6 months due to injury. Danny Welbeck is still in recovery with a comeback date still unknown. Shkodran Mustafi is a doubt, he limped off to what looked like a hamstring injury. Dinos Mavrapanos is likely to return this month while Nacho Monreal and Captain Laurent Koscielny both expected to make their comeback in this fixture.

Qarabağ FK will be missing the services of Innocent Emeghara, the Swiss centre forward who is out with a torn meniscus expected to be back in January 2019. Apart from that, Qarabag should be a strong team with minimal changes from the one that was selected in Baku.

The gunners are currently on an unbeaten run of 21 matches. Arsenal are facing a defensive crisis with that in mind, the Qarabag manager will definitely want his team to give it’s best on this final group stage game. This game promises to be a very competitive one and am sure we will see some goals.

Southampton Vs Arsenal, Unai Emery will need a win