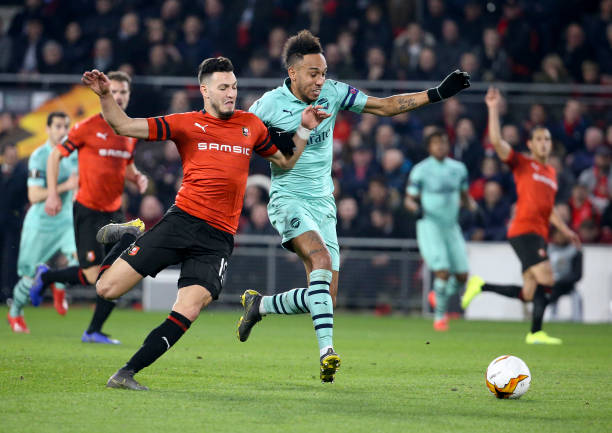 ( Rennes Vs Arsenal / Photo via Getty )

Arsenal lost 3-1 to Rennes in the first leg of the UEFA Europa League round of 16 but Unai Emery and his men will be hoping to overturn this loss by defeating the French side at the Emirates Stadium to qualify for the quarter finals. It will not be easy for the North Londoners because they will need to score atleast three goals to be safe but a 2-0 win will be able to get them to the next round.

Arsenal looked set to beat Rennes on Thursday last week at the Roazhon Park after an early goal from Alex Iwobi gave them confidence to look for other goals despite being in a very hostile stadium but a second yellow card for Sokratis so the gunners play the rest of the game with only 10 men. Rennes equalised and got two more goals at their home ground, so they will come into tomorrow’s match with an aggregate score of 3-1.

Arsenal has however regained the faith of its fans by defeating Manchester United on Sunday to go back to the Premier League top four and they will now face Rennes with immerse confidence because they should have enough man power to eliminate the 8th placed Ligue one side. Rennes was also victorious at the weekend, they beat Caen 3-1 to go into the 8th position on the French Ligue one table.

Rennes will be a tough opponent for the gunners as Unai Emery said in his pre-match press conference because they are disciplined at the back and always like counter attacks, which are something that the gunners have failed to avoid even under Unai Emery.

UEFA confirmed on Tuesday that Alexandre Lacazette’s red card in Belarus will only see him miss two matches ( which he has already missed ). So this will see him be available for tomorrow’s match. Henrikh Mkhitaryan was not in the squad that faced Manchester United and latest team news say he will be assessed before the game. Arsenal will of course be without Rob Holding, Bellerin and Welbeck because they have long-term injuries.

Rafik Guitane and Romain Danze will not be available to face Arsenal, so apart from those players, Rennes is good to go. It’s squad arrived in London this afternoon.