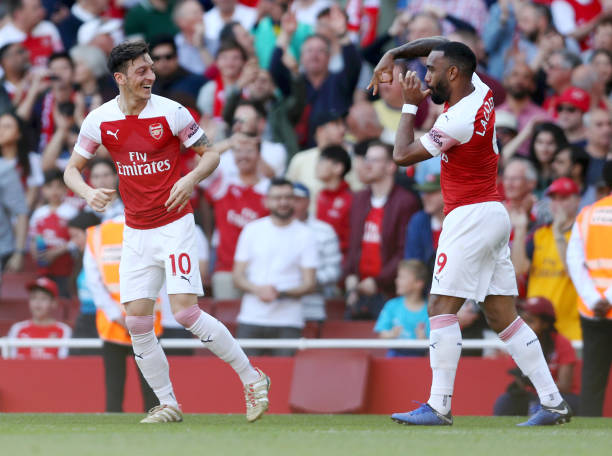 The gunners welcomed Crystal Palace at the Emirates Stadium on Sunday and they lost the match 2-3 due to poor defending from their centre backs who were at fault for the two goals that Arsenal conceded. Lacazette and Mesut Ozil combined well to try to bring the gunners back into the game but it was however not enough.

Mesut Ozil was not in the starting eleven of Arsenal that faced Napoli away from home but he however got back into the lineup in their game against Crystal Palace. The German midfielder wasn’t very impressive in the first half like all his teammates but he however redeemed himself in the second half by equalising for the gunners in the first minutes of the second half.

He however did not do anything noticeable after Crystal Palace scored their second goal of the day but he however did try to bring the gunners back into the game. The midfielder has sent a message to the Arsenal fans via Twitter.

Frustrating day at the Emirates. We have to stick to each other now. Four crucial @premierleague matches left this season. #WeAreTheArsenal #M1Ö #COYG @arsenal pic.twitter.com/aEhq6xVp4b

“Frustrating day at the Emirates. We have to stick to each other now. Four crucial Premier League matches left this season.”

Alexandre Lacazette has been very impressive this season but he has been a bit off ever since that defeat against Everton but you can always trust him to give 100% on the pitch. The Frenchman also had an awful first half but he however assisted Mesut Ozil to equalise for the gunners in the second half.

Lacazette also had two penalty pleas rejected by the referee when they were genuine. The Arsenal attacker has however sent a nice message to the Arsenal fans. He wrote;

We Win Together.. We Loose Together.. Fight, and Believe until the End !! #Coyg #laca pic.twitter.com/axwxiBGkxj

“We Win Together.. We Lose Together.. Fight, and Believe until the End !!”

Will Sokratis and Granit Xhaka play in Arsenal’s game vs Wolves?