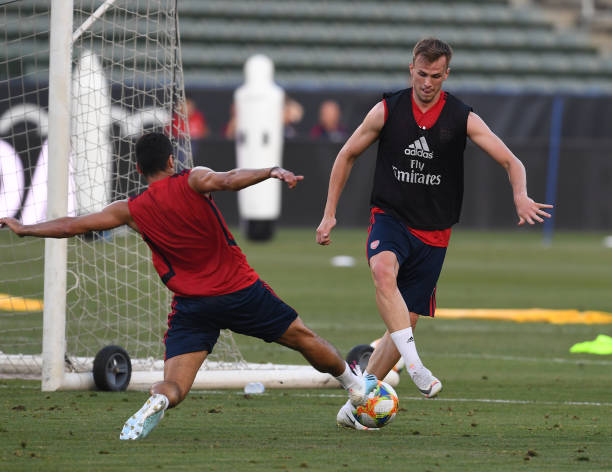 Arsenal defender Rob Holding got injured In December last year and he was ruled out for the reminder of the season. Arsenal fans have since then realised how he was important in their backline as their defence started getting worse after he went on the sidelines.

Arsenal head coach Unai Emery had made Rob Holding a regular starter in the Premier League and the centre back played an integral part in their 22 game unbeaten run and the fans obviously missed him throughout the 2018/19 campaign as he obviously missed half of it.

The gunners traveled to USA a few days back to start preparations for the upcoming season and Rob Holding was included in the selected squad alongside other injured players like Hector Bellerin, Emile Smith Rowe and Dinos Mavropanos. Unai Emery has been conducting some training sessions there as they will be playing some matches in different places in USA and he has delivered some exciting news about Rob Holding.

After more than six months on the sidelines, Arsenal’s head coach Unai Emery has confirmed that Rob Holding has started light training and this gives gooners hope of seeing him available for selection atleast at the end of August.

“We are really happy with Holding’s progress. He started training with us a few days ago. We’re going to do one process to let him play little by little. We need his performances as a centre-back.” said Unai Emery as quoted by the Mirror.

“When he had his injury he was really playing with big performances. We’re looking forward to seeing him with us and other players with injuries like Bellerin, Mavropanos and Emile Smith Rowe. We are waiting for Holding to come back with us with his quality.”

Unai Emery will also be delighted as the Arsenal fans to have Rob Holding back because the young Englishman is the only centre back in his squad that looked comfortable in playing from the back last season.

Emery speaks out on the injury of Lacazette