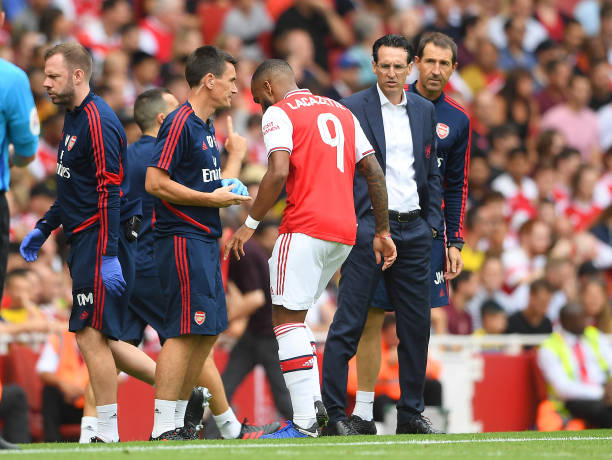 Arsenal got beaten 2-1 by Lyon at the Emirates Stadium today and the gooners weren’t only disappointed with the result, as their striker Alexandre Lacazette also got injured in the first minutes of the game. The French striker was later seen with a protective boot during the game and this has made the Arsenal fans to get scared.

Alexandre Lacazette was very impressive for Arsenal last season and he has formed a great partnership with Pierre-Emerick Aubameyang and gunners head coach Unai Emery wouldn’t want to start the season with one of them missing especially since the club decided to release Danny Welbeck in this summer transfer window.

Arsenal’s head coach Unai Emery faced the media after his side had got beaten by Lyon 2-1 at the Emirates Stadium and he confirmed that Alexandre Lacazette’s injury isn’t serious and that they decided not to take any risks since they are in pre-season at the moment.

“We are thinking it’s not important, he decided with the doctor and with me that it is better to take no more risk.” Unai Emery told Arsenal’s official website.

“He tried to continue playing but I think it was better in the pre-season to take patience. The doctor said to me he is going to check tomorrow but the thinking is that it is not important.”

The Arsenal fans will be hoping that Alexandre Lacazette returns to training as quickly as possible as it would be highly disappointing if they started the 2019/20 campaign without him since he was their second top scorer last season.