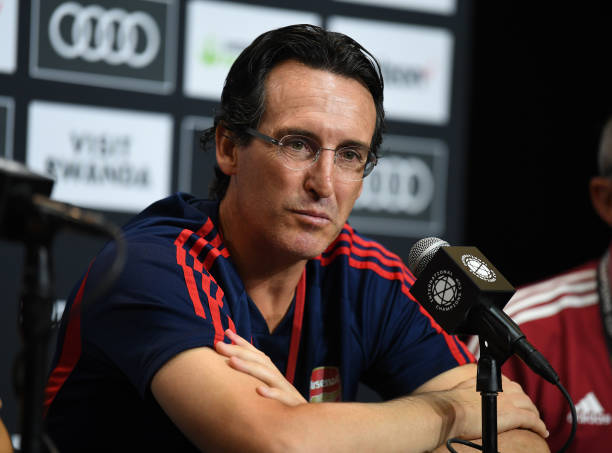 The gunners have so far signed only Gabriel Martinelli and Unai Emery will be hoping that the club brings in new faces before the transfer window gets closed in August. The Arsenal fans are currently desperate to see their team sign new players as they weren’t happy with the performance of some of their players last season.

Arsenal’s summer transfer business has been very depressing for the fans as they are yet to see new signings and the club has however also not sold the players that did not impress last season. Yesterday, Arsenal’s vice chairman Josh Kroenke said that the fans should be excited as he has been told that some new players are coming.

Arsenal will today face Bayern Munich in the International Champions Cup and Unai Emery faced the media ahead of this game and he also revealed some exciting news for the gunners who are eager to know about the club’s summer transfer business. The Arsenal head coach Unai Emery has hint that the gunners will bring in three to four players including a very expensive player.

“We are being very, very demanding and we are first speaking about the possibility to sign very big, very expensive players and the first player in our list is our first target.” Unai Emery told Arsenal Media.

“And after, if we cannot achieve that, then the second. But we are thinking every time that they are going to improve our squad.”

The gunners have indeed been linked with some expensive players in this transfer window like Nicolas Pepe and Wilfried Zaha and the Arsenal fans will be hoping that the expensive player Emery spoke of is either of those two.

Dani Ceballos is reportedly on the verge of joining Arsenal