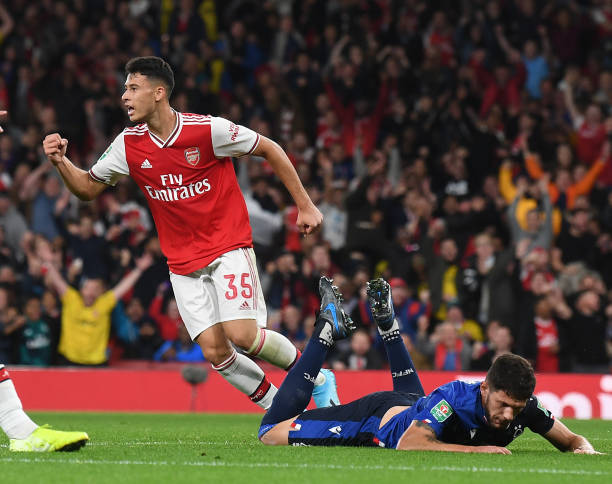 Arsenal completed the signing of Gabriel Martinelli in the summer transfer window and he has been training with the first team ever since the season begun. The young Brazilian was signed from Ituano which is in the fourth tier of Brazilian football but he did show his quality yesterday as the gunners dismantled Nottingham Forest.

Gabriel Martinelli was Arsenal’s first summer signing and he was put in the squad that played in the pre-season matches. The 18-year-old has spoken about his first days as an Arsenal player and he claims that he was happy to meet Aubameyang but he however was surprised that it’s the striker who himself walked up-to him and spoke with him in Portuguese.

Pierre-Emerick Aubameyang has been at Arsenal since January, 2018 and there were reports that he was a bad influence in the dressing room before he joined but Gabriel Martinelli has however revealed that the Gabonese international has been giving him advice.

“It hadn’t sunk in yet. I arrived for lunch on the first day, I’m eating there, Aubameyang arrives and sits next to me, speaking Portuguese with me, ‘Tudo bem?’, trying to communicate.” Gabriel Martinelli told Globo Esporte.

“He’s also a guy who gave me a lot of support at the club, trying to communicate with me. I have to thank everyone at the club. They’re very nice people.”

Gabriel Martinelli will be hoping to get a chance in the Premier League but he is however for now assured a start in the cup games as he put two against Nottingham Forest. Unai Emery has shown that he always gives chances to youngsters best on their performances so hopefully, Martineli will soon get a chance in the league in the near future.