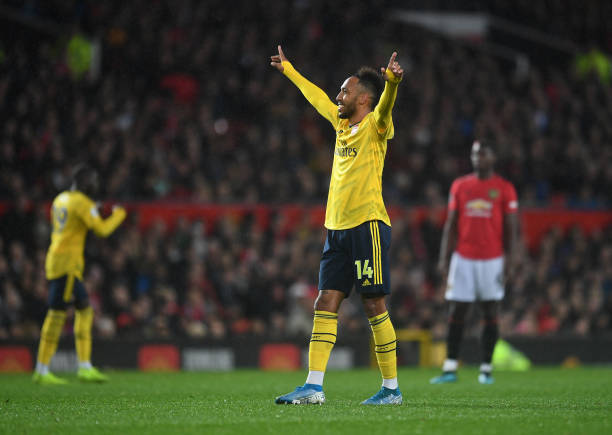 Pierre-Emerick Aubameyang has been very useful for Arsenal this season because he has either scored or assisted in all of the Premier League matches that he has so far played this season. The Gabon international once again put the ball into the back of the net as the gunners drew 1-1 with Manchester United at the Old Trafford.

Aubameyang was of course in the Arsenal starting eleven that faced Manchester United last night and even though he had a poor performance in the first half, he however still rose to the occasion when called upon as he equalised for the North Londoners in the 58th minute. The Arsenal striker has now scored 14 goals in his last 14 Premier League matches and the Arsenal fans will be hoping that he continues with this form as their other players aren’t scoring goals.

Aubameyang was heavily criticized in the last few weeks because of his failure to score against the big six sides but he this time proved everyone wrong as he scored against the Red Devils and he said that he was happy that they came from one goal down to draw the game. He however claims that he believes that the gunners need to be more confident in the first half because they have been coming from one goal down in their last two Premier League matches.

“I think the team fought very well today. We’ll take a point. It’s always hard to come here so we will take it.” Aubameyang told Football.London.

“It’s not easy when you take a goal just before half-time. But we came back in the second half with great spirit. Last week we came back as well. We need to start with confidence.”

Arsenal fans will be hoping that the club gives him a new deal because he will be a goal threat for atleast three more years as he is still firing in goals despite being 30 years old.