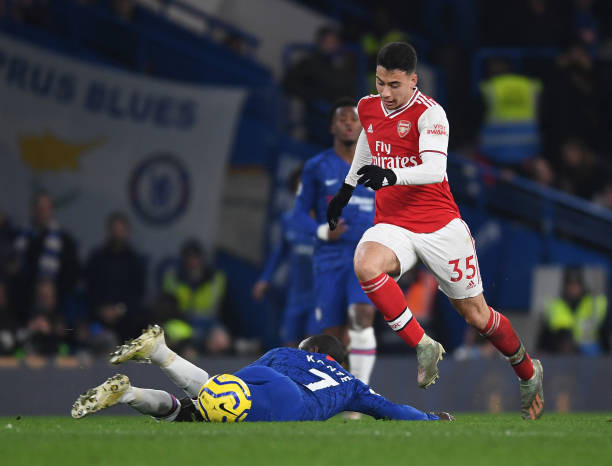 Arsenal completed the signing of Gabriel Martinelli in the summer transfer window and he has turned out to be an incredible acquisition as he has scored 10 goals for the club already despite having turned 18 in July.  Arsenal’s new signing Pablo Mari has praised Gabriel Martinelli for stepping up for the gunners this season.

Gabriel Martinelli has signed from Ituano for around €6million but his value has certainly doubled as he has been outstanding for Arsenal this season. The 18-year-old used the minutes that he was given in the cup competitions to secure a place in the Premier League starting eleven and he has managed to get there, and score three league goals.

Arsenal signed Pablo Mari from Brazilian side Flamengo and he has revealed that people in the South American country are excited about the development of Gabriel Martinelli and also spoke of what makes him special from other teenage footballers.

“Martinelli has shown he is a bit different to any other player in terms of his ability. He has great vision and there’s real talent there in terms of his dribbling and his ability to choose the right play.” Pablo Mari told Arsenal.com.

“His decision-making is improving all the time. Martinelli still has a lot more to show but he has incredible talent and I think gradually he’ll keep developing and become a top player.”

Pablo Mari is yet to feature for the gunners after having arrived in the January transfer window but he is expected to play after the break since he will have spent more time with the squad and he also need to get sharp since the league in Brazil had already ended.

Pablo Mari also said that he hopes that Martinelli keeps working hard even though he has already tested football at the high level. Mari and Martinelli could play together for the first time in a few weeks time when the gunners welcome Newcastle United at the Emirates Stadium and the gooners will be hoping that he has a similar debut like that of the 18-year-old forward.