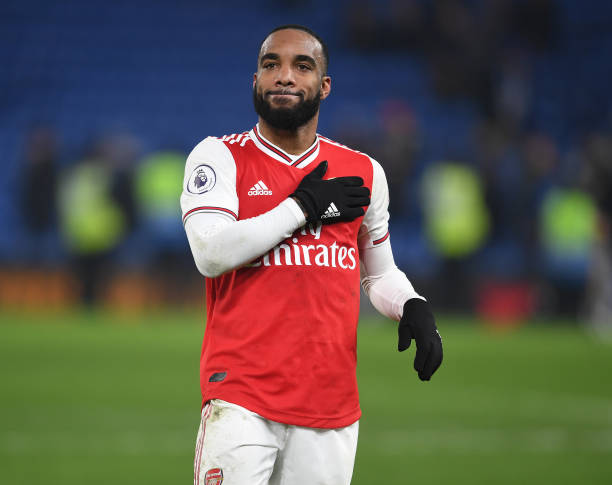 Arsenal signed Alexandre Lacazette from Lyon for €53million in the 2016 summer transfer window and he hasn’t been that impressive for the gunners since they brought him hoping that he would atleast be hitting in 20+ for them as he did in the French Ligue one. Lacazette was somewhat impressive in the 2018/19 campaign but he has been off form this season especially in the last few weeks.

Lacazette has five goals in the league this season but he has however now went on a league goal drought ever since he scored a double against Southampton in the last days of Unai Emery’s era and so we now take a look at how Mikel Arteta’s system is one of the reasons why he is struggling.

Alexandre Lacazette has started in all the Premier League matches that Mikel Arteta so far managed and he is yet to score in any of them hence getting heavily criticized by the fans. Even though Lacazette has been wasting a lot of chances but he is however not playing as a striker due to Arteta’s system since he has been dropping into the midfield numerous times to help connect with Arsenal’s wingers hence him not getting goal scoring chances.

Lacazette has also been pressing a lot under Arteta and since Mesut Ozil has been given a free role in the system, The Frenchman is basically also playing as a central attacking midfielder to help in the build up of attacks as you can even observe in the following heatmap which shows that he nowadays wonders a lot in the midfield under the manager than he did when Emery was still at the North London club. Here is a heat map of Lacazette’s positioning under Arteta and Emery as provided by Football. London journalist James Benge.

Lacazette heatmap under Arteta and Emery in the league

So as you can see, he is not in the forward line as he was in Emery’s tenure and this has been one of the main reasons that he has gone on a goal drought. And combining this with the fact that he is currently low on confidence at the moment, it looks like the gunners will have to get used to seeing him more of a creator under Arteta as he did show this ability in the 1-1 draw with Crystal Palace when he set up Aubameyang’s goal.

It will be interesting to see if Lacazette will get used to this new role under Arteta and whether it bare fruit for Arsenal since Arteta’s system requires him since he is better than Aubameyang in hold up play while the Gabon international is the superior no.9.