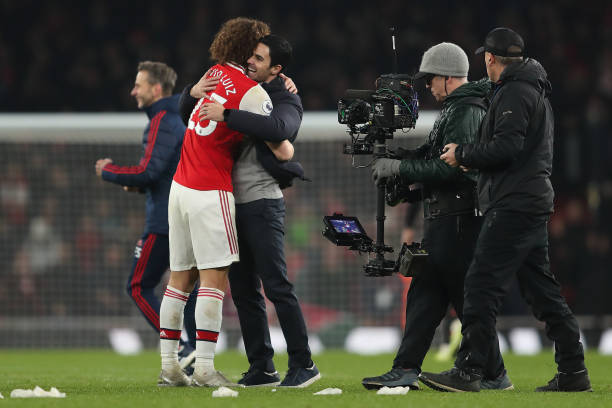 Arsenal appointed Mikel Arteta as their new head coach in December, 2019 and he has turned out to be a great option as the gunners have already shown that they will continue to improve under the Spaniard. Arsenal defender David Luiz has spoken out about the philosophy of his current boss Mikel Arteta and he says that he loves it so much.

Arsenal have always been known as a club that plays attacking football and they seemed to be losing that in the last few months of Unai Emery but the fans have however been happy with Mikel Arteta since he has promised to bring back that free-flowing attacking football that saw many get attracted to the club. Mikel Arteta has had a great start to life as an Arsenal boss as they’ve lost just twice since he took over.

Arsenal completed the signing of David Luiz in the summer transfer window and even though he had a poor start to life as a gunner but he has however improved under Mikel Arteta and he has been simply impressed with their current boss. Luiz who celebrates his 33rd birthday today says that Arteta will be one of the best coaches in the world and also says that he loves the football that they are playing under the 38-year-old head coach. The Brazilian centre back also added that they are yet to see them at their best under Arteta since he is still trying to organise them.

“His philosophy is the way I love to play football and that makes it easy for me to adapt to. We try to dominate and control possession, and try winning the ball back as soon as we lose it.” David Luiz told Arsenal Player.

“This is the idea I really love when I play football. I think Mikel is just trying to organise us every single day in the details, to make the quality of our work even better.”

“It doesn’t matter if it’s his first job as a coach or not. He knows football, he knows inside the pitch. He prepared himself outside the pitch and he’s ready for that.”

“I’ve had the opportunity to work with many, many coaches already in my career and I think he’s more than prepared to do the job. The enthusiasm comes naturally when you love something. He loves football, he loves to work, so this enthusiasm is contagious for everybody.”

Arsenal legend speaks out on what Bernd Leno needs to improve at!