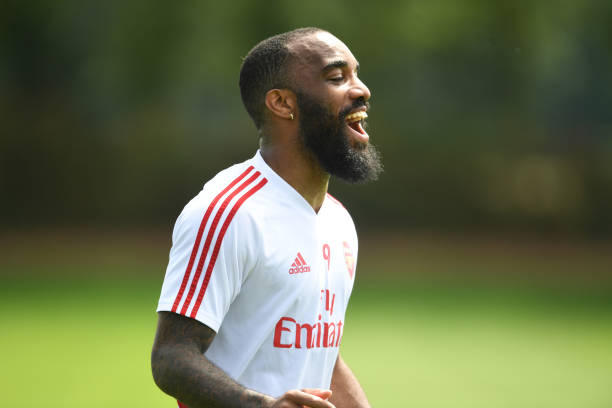 Arsenal completed the signing of Alexandre Lacazette in the 2017 summer transfer window and he had an awesome start to life as a gunner as he scored against Leicester City on his debut. Lacazette was Arsenal’s player of the season last year and he has scored nine goals in this campaign, and it’s now claimed that Inter Milan are interested in him.

Alexandre Lacazette got replaced six months after Arsenal had signed him but he however became a very pivotal player for the North Londoners in the 2018’/19 campaign when he became a striking partner of Pierre-Emerick Aubameyang but he has however this season been inconsistent hence him falling out of favour with the supporters. Despite Lacazette having poor numbers this season, the Frenchman is still considered to be an incredible striker as Inter Milan want to bring him to Serie A next season.

L’Équipe as revealed by GFFN claims that Arsenal striker Alexandre Lacazette has been approached by Serie A side Inter Milan and that the Frenchman has told them that he is however not interested in leaving the Emirates Stadium at the moment. The Arsenal board will probably be happy that Lacazette is not agitating for a move since the chances of them losing Aubameyang are high and so they will be happy that they won’t be expected to try to replace two senior strikers in the same summer transfer window where clubs have lost money due to the pandemic.

Lacazette still has two more years on his current contract at Arsenal and it will be interesting to see what decision that the club makes since their head of football Raul Sanllehi did say that he would make sure that their valuable players would stop leaving the club for free. So as per Raul’s words, the gunners will have to either sell Lacazette or offer him a new deal before he enters into the final year of his current deal at Arsenal.