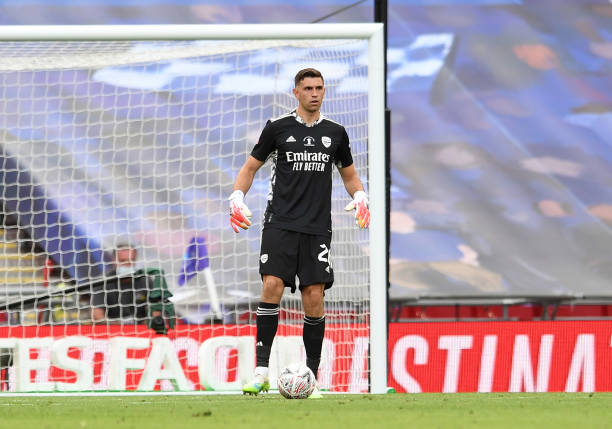 Arsenal appointed Mikel Arteta as their head coach in December last year and he has turned out to be an incredible boss as he has led the club to FA Cup glory in his first season as a manager. Emiliano Martinez has spoken out on Arteta and him crying after the final.

Emiliano Martinez has in the last few weeks won over the hearts of the Arsenal fans after his impressive performances after the unfortunate injury of Bernd Leno in June. Martinez was very influential in the winning of the FA Cup as he had two incredible performances in the semi finals and the final.

It has been an emotional time for Emiliano Martinez as he made his dream of winning Arsenal a trophy come true and he was also asked about what type of boss Mikel Arteta is, and he praised him saying that he has been good with them. Martinez says that Arteta was great as a player and that he is now an animal as a coach.

“Mikel was a great player, always a leader. Now as a coach he’s an animal, he gives us plans and makes us believe that it’ll work.” Martinez told La Red as per ESPN.

“Everything that happens we practice, when we play we’re calm. I know that when I receive the ball I will have a midfielder close to triangulate.”

LONDON, ENGLAND – AUGUST 01: Pierre-Emerick Aubameyang (R) and Emiliano Martinez of Arsenal field questions from the media after the FA Cup Final match between Arsenal and Chelsea at Wembley Stadium on August 01, 2020 in London, England. Football Stadiums around Europe remain empty due to the Coronavirus Pandemic as Government social distancing laws prohibit fans inside venues resulting in all fixtures being played behind closed doors. (Photo by Stuart MacFarlane/Arsenal FC via Getty Images)

Emiliano Martinez has spent 10 years at Arsenal but it’s only this season that he has finally got the chance to showcase his talent after countless loan moves and he has surprised everyone with how good he is as he was one of their best players since the league restarted. Martinez was seen crying after the game in his interview and so he has commented that he was very emotional since the game had just ended and that also because of what Aubameyang had told him.

“Tearful because the game had just ended, Aubameyang told me that he admired me a lot, he said I was the one. He’s a great striker, he’s a crack.” said Martinez.

Report: Details emerge revealing the new Arsenal contract that Aubameyang is about to sign