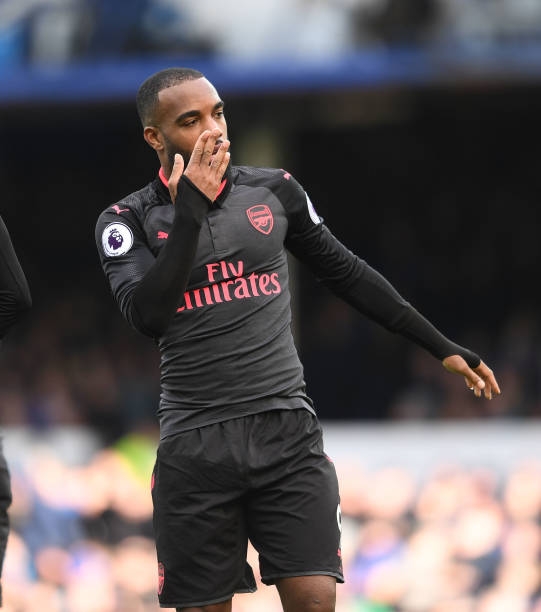 Alexandre Lacazette was among the players that helped Arsenal beat Everton 5-2 in a remarkable come back in the 2nd half. The French striker scored the gunners third goal against the toffees after being set up by Mesut Ozil who provided the assist to the goal.

That goal has eased up on the pressure that was on the head of the Arsenal record signing because there was a lot of critics attacking the striker for his poor performances. Arsenal legend Ian Wright said that he was impressed with the performances of the player but gives him some bit of advice;

“When he gets into the penalty area, he finishes so so well.’ the legend was speaking at the Match Of The Day 2 programme.

‘I don’t want to see him come and getting involved in the link up play because we have enough players that can do that.

‘I would love to see him on the edge of defenders, and running into those little slots, stretching teams.”

Alexandre Lacazette joined the gunners in July and he has showed signs that he could be a great signing as he has scored five goals in the English Premier League which isn’t that bad for a player that isn’t used to the toughest league in the world.

The French striker has always said that he wishes to score many goals for Arsenal but the player has never played the full 90 minutes which some gooners say that it might be the reason why Alexandre Lacazette showed the type of performances he did in his former club in the French Ligue One.

The French striker has been outstanding in the previous seasons with his former club as he was usually scoring almost 20+ goals each season but yesterday’s goal was his 5th with over 20 matches left to play.

The gunners signed Alexandre Lacazette from Lyon in last summer’s transfer window on a record fee believed to be around £52 million and the Frenchman has showed some signs that he could be a great signing as he scored in his first English Premier League match in less than 3 minutes in the English competition and this. is still giving gooners strong hope that it was right to sign him for that such big amount.

Arsenal Legend Gives Out His View On Ozil’s Performance