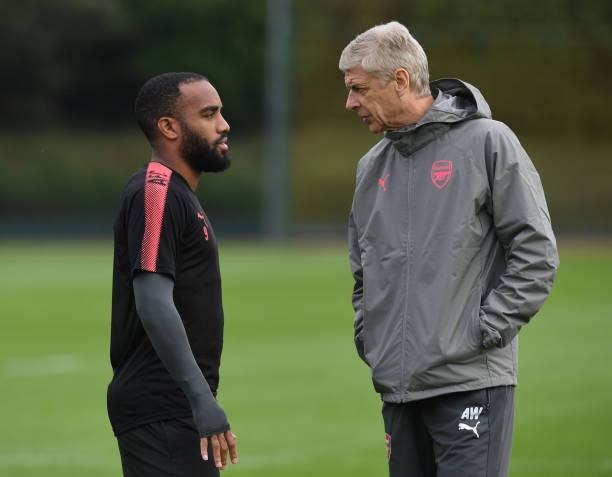 Arsenal signed Alexandre Lacazette in the summer transfer window in July and the player has showed signs that he can improve to be one of the best players the gunners have ever signed.

The striker has been trusted by Arsene Wenger because he has always been given starts by the manager numerous times in the English Premier League but what has been making the supporters angry is that the manager has been benching the Frenchman in important matches like the Liverpool and Manchester City .

The manager has usually avoided this question and could give some pity excuses but he has today opened up why he specifically left Alexandre Lacazette from the squad that faced Manchester City so the journalist asked if the manager has lost trust in it.

“No, not at all. I have a big choice to make every time, decisions to make up front.’ the manager is quoted by METRO.

‘He has played many games, he did not play away from home at City, that is the only one and overall I trust him.’

The manager says that his decisions shouldn’t be misunderstood because it is not like how people think when they say that he doesn’t have trust in his new mega money signing from Lyon.

The manager was pinned to a question on whether he will be giving the forward a start against Tottenham Hotspurs and here is what he replied!

“The decision is not made yet. It is possible because he’s available.” said Wenger.

The Arsenal supporters will be hoping that the manager gives Alexandre Lacazette a start in the North London derby and this will be the best chance for the French international to win over the hearts of the supporters because this is a match which gooners closely follow because Spurs are considered to be the main rivals of Arsenal.

Arsene Wenger confirmed that Olivier Giroud has got an injury making him a doubt for Saturday’s match so this means that Lacazette will certainly be given a start against Spurs because he was even impressive in the international matches after he scored a double.

Alex Iwobi Names The Most Skillful Player At Arsenal

Arsene Wenger Reveals Whether Will Leave At End Of Season