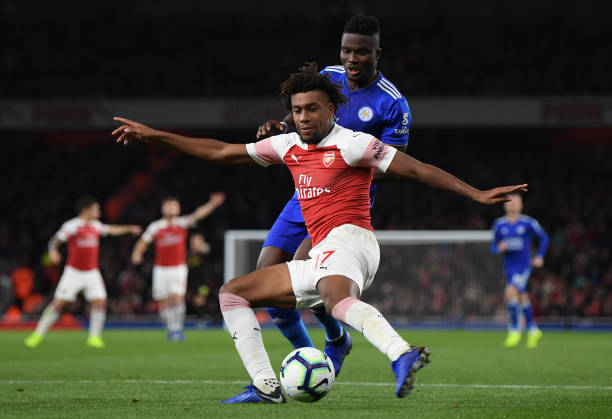 Arsenal midfielder Alex Iwobi has been impressive for the gunners this season and most of the supporters believe that he has been rejuvenated by gunners new boss Unai Emery.

Alex Iwobi had a fantastic performance against Fulham two weeks ago and the Nigerian international was selected in the starting eleven of Arsenal that played Leicester City on Monday, the decision by Unai Emery to start him didn’t turn out to be unfruitful because the winger was dribbling all over the pitch and even nutmegged a Leicester City player, the Arsenal fans have made GIF of that move and have shared it all over the internet.

The gunners defeated Leicester City 3-1 and Arsenal’s midfielder Alex Iwobi was given the man of the match award for his impressive performance against the Foxes. The Arsenal players went back to the dressing room after the game and Shkodran Mustafi recorded a video as he came towards Iwobi shouting “The Nigerian Messi”, and the Nigerian international seemed to be shy as he smiled.

This will definitely be Alex Iwobi’s best season at the Emirates Stadium because he has been promising in Arsenal’s last few matches and it won’t be long until he can retain his position in the starting eleven because the Arsenal fans never expected Unai Emery to bench Aaron Ramsey to start the Nigerian international.