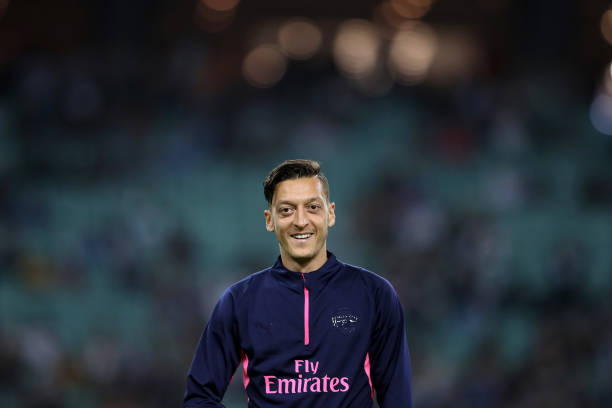 Arsenal will tomorrow welcome Qarabag at the Emirates Stadium to finish their UEFA Europa League group stage matches but they will come into this while they are stress free since they have already qualified. The gunners have released the latest team news ahead of the encounter against the Azerbaijan side Qarabag.

Mesut Ozil has missed Arsenal’s last three matches against Tottenham Hotspur, Manchester United and Huddersfield Town because of a back problem but it seems the German international is now fully fit to play according to the latest team news from the club. Arsenal fans will be happy about this because their last match showed that they missed a central attacking midfielder in the squad that played against Huddersfield so its great that he might play against Southampton at the weekend.

Aaron Ramsey missesd the match against Huddersfield Town on Saturday because of the slight injury which he got at the Old Trafford when the gunners faced off against Manchester United. It is unfortunate that he had just got back into Unai Emery’s first eleven but he got sidelined a few days later, but the good news is that he has also returned to full training and is fit to play in their next match. He could probably captain the Arsenal squad that plays against Qarabag tomorrow.

Danny Welbeck is still recovering from his ankle injury while Rob Holding will undergo a surgery because of the anterior cruciate ligament injury according to a statement from the North London club. Shkodran Mustafi did not finish Arsenal’s match against Huddersfield Town and he will be assessed before their match against Qarabag while Dinos Mavropanos is expected to make his return this December.

Revealed: How Mesut Ozil is the reason why he gets injured