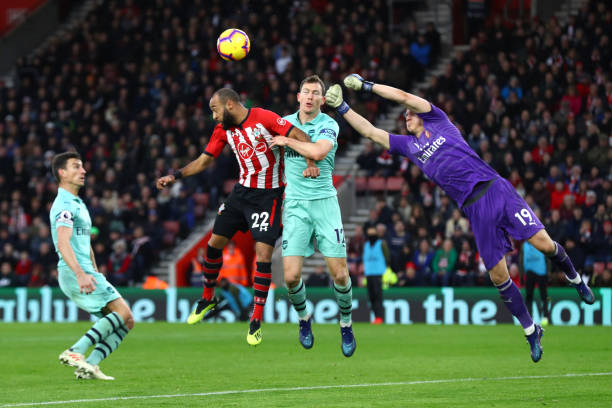 Southampton welcomed Arsenal at the Saint Mary’s Stadium on Sunday and they collected all the three points thanks to a late goal from Austin in the 85th minute. Arsenal came into this match with confidence because they had not lost any match since August.

Arsenal players have certainly enjoyed their 22 game unbeaten run because they have not been criticized by the supporters and most footballers usually like using their social media accounts to celebrate with their fans after winning a match but it is a different scenario when they lose. All Arsenal players except Stephan Lichtsteiner have not opened up on their defeat to Southampton, and this has shown how the Swiss international is an experienced and lovable player.

Not what we expected! But now lets keep calm and keep up the hard work! #WeAreTheArsenal???? #COYG #YaGunnersYa @Arsenal pic.twitter.com/ExdrQeUVNh

“Not what we expected! But now lets keep calm and keep up the hard work!”

Stephan Lichtsteiner was played as a centre back on Sunday and he didn’t impress in that position because it is not his rightful position. Some Arsenal players replied his tweet saying that he didn’t perform well while others appreciated his leadership skills. Unai Emery said that he was happy with the performance of Stephan Lichtsteiner after the game.

Stephan Lichtsteiner is an old experienced right back but he has this season not been playing in his rightful position because the gunners have two other right backs; Hector Bellerin and Carl Jenkinson. He has however earned respect from the Arsenal fans for always showing his leadership and experience on the pitch because he’s always seen trying to calm down players, talking it out with the referee in intense situations and also cares about his teammates.

Arsenal’s possible opponents in the Europa League Round of 32

Report: Why Lucas Torreira made no impact in loss to Southampton