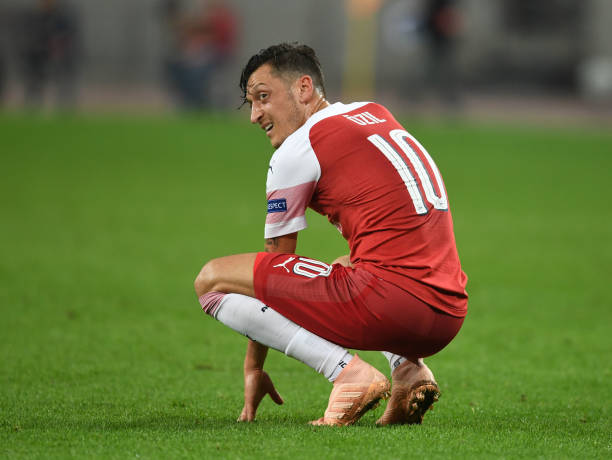 The gunners will tomorrow take on Bate Borisov at the Emirates Stadium and the Arsenal supporters will be hoping to see Mesut Ozil in the starting eleven because they missed his creativity in the first leg of this UEFA Europa League tie.

It is going to be a must win game for Unai Emery’s men because the UEFA Europa League is their only chance of silverware this season. Mesut Ozil did not travel with the rest of the Arsenal squad last week because he didn’t do enough in training according to Unai Emery but he could be in the starting eleven that faces Bate Borisov this Thursday.

Mesut Ozil has taken part in all the training sessions done this week and they did the last one this afternoon. The German international must have enjoyed the training session as he has today tweeted a picture of him and his teammates looking happy.

“We are the Arsenal.”

Most of the Arsenal fans have replied saying that they hope to see him in the lineup that faces Belarusian side Bate Borisov. Arsenal head coach Unai Emery did hint at including Mesut Ozil in the starting eleven that plays tomorrow because he said that he was happy that the 30-year-old was training they way he wants while talking in his pre-match press conference.

If Mesut Ozil does get a start tomorrow, all eyes will be on him to do what he knows best because the Arsenal fans have for long been urging Unai Emery to be using him in all matches.