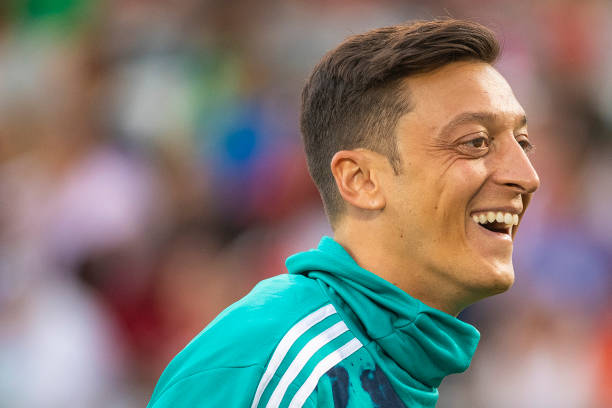 The gunners are currently doing their US tour and have so far played two matches with the second one being a 2-1 win over Bayern Munich. Arsenal’s boss Unai Emery gave some chances to youngsters in that game and Joe Willock was one of the best players on the pitch in that game and Mesut Ozil has now praised him.

Joe Willock was partnered with Granit Xhaka in the central midfield and he put on an incredible performance as he was helping the defence as well as linking up the attack with Mesut Ozil who was forward with the likes of Aubameyang and Lacazette. Willock’s performance has made the Arsenal fans to recognize how they have a great player on their hands and they weren’t the only ones impressed as his teammate and mentor Mesut Ozil has also spoken highly of him.

Arsenal head coach Unai Emery did also show confidence in Joe Willock last season as he even brought him in the UEFA Europa League final and it looks like the young Englishman is making the most of the chances that he is receiving. Willock also made a good number of appearances in the Europa League group stage matches.

Mesut Ozil who also made a breakthrough at a young age says that one of the reasons why Willock has improved in the last few months is because he is because he believes in himself and that him training with the first team last season helped him a lot.

“He knows what he can do, so he is not arrogant on the pitch but he is, how can we say, he believes in himself. Especially yesterday against Bayern Munich, against a big club, he shows his quality. We are happy to have him.” Mesut Ozil told Arsenal’s official website.

“He was strong last year as well so, of course, if you really work with the first team together always, you feel more comfortable and you believe in yourself more. I think this season he can show his quality and I think he can help us this season.”

The gunners still have some more pre-season matches to play and Joe Willock will be hoping that he gets more opportunities in these games as Unai Emery did give many chances to Matteo Guendouzi last season because he was impressive in the 2018/19 pre-season games.

Mesut Ozil comments on his relationship with Unai Emery

Report: Arsenal fans get a glimpse of the Emery and Ljungberg partnership