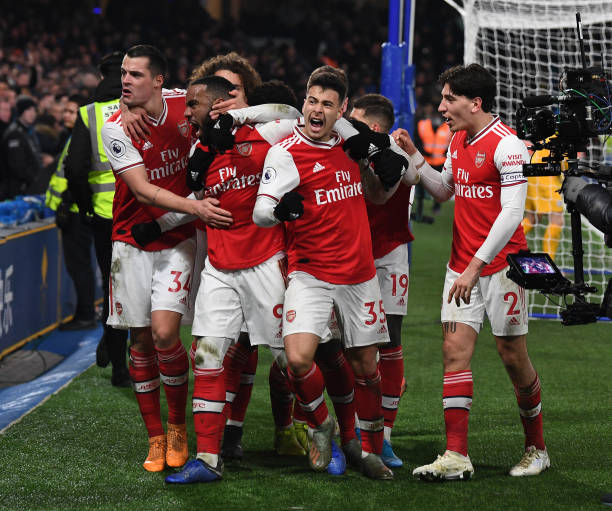 The UEFA Europa League is back and Arsenal will today welcome Olympiacos at the Emirates Stadium for the 2nd leg after having won the first game 0-1 in Greece last week. The gunners will be hoping to progress because this competition could be their best route of getting a UEFA Champions League spot. So here is the predicted Arsenal lineup with all eyes on Lacazette and Martinelli.

Arteta has already shown that he takes the Europa League knock out games seriously when he started Leno, his first choice goalkeeper in the first leg and the German international will probably also start in between the goal posts today again.

Shkodran Mustafi has been impressive in the last few weeks and definitely deserves a rest. Saka will fill in at left back once again since Kolasinac got injured in the game against Everton. So Arsenal’s back four will consist of Saka, Luiz, Sokratis and Bellerin.

Lucas Torreira returned to the matchday squad at the weekend and will probably be given a start in today’s match since Xhaka also deserves a rest after playing three games in a short time. The Uruguayan international will be paired with Dani Ceballos who has been impressive in the last few games.

Mesut Ozil returned to the squad at the weekend and since he is fresh, he will be in the central attacking position because no player has shown to be good in that position this season. Martinelli and Pepe will start as wingers as Aubameyang will be given a rest to prepare for the important upcoming Premier League games.

Alexandre Lacazette scored in the first leg against Olympiacos and so he will start ahead of Eddie Nketiah despite the teenager scoring against Everton.