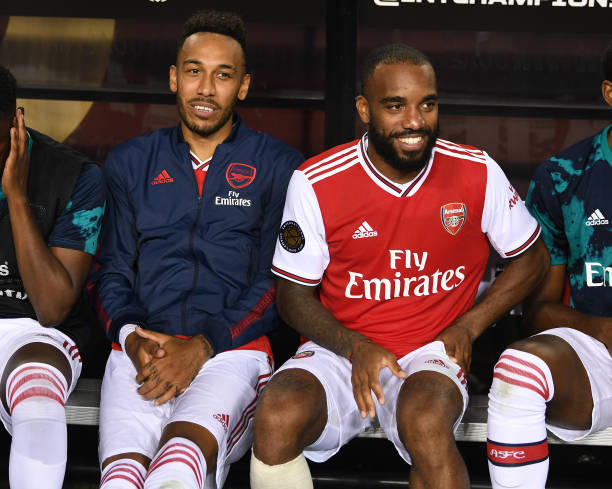 Arsenal will in the summer transfer window try to make new signings because they will for the fifth time try to get into the UEFA Champions League if they failed to do so this season. Both Lacazette and Aubameyang have been linked with a move away from Arsenal and its now being reported that the North Londoners have made contact with Lyon striker Moussa Dembele.

Aubameyang will soon enter into the final year of his current deal at Arsenal and there are a number of many clubs like Barcelona and Inter Milan that have already shown interest in the Gabon international. Lacazette still has two more years on his current contract and he also is reportedly wanted by Atletico Madrid hence Arsenal deciding to make a move for Lyon’s Moussa Dembele.

Highly reputable French outlet L’Équipe reports that Arsenal have made contact for Lyon striker Moussa Dembele ahead of other clubs such as Manchester United and Chelsea who are also interested in the French attacker. Dembele has been impressive in the last two years and he had even already scored 16 goals as well as making two assists before the French government decided to cancel the rest of the 2019/20 Ligue one season.

Arsenal will be hoping that Moussa Dembele accepts to join them because he could be a formidable player in the Premier League and the gunners will be hopeful that their long history of having French players in their squad will be able to convince the Lyon forward to come to the Emirates Stadium. Arsenal signed Lacazette from Lyon and so it will be interesting to see if the North Londoners will once again sign a striker from the same club to replace someone who they signed from there three years ago.

Arsenal fans have had mixed reactions on the possibility of getting Dembele because they don’t know if he would be replacing their top scorer Aubameyang or Lacazette who has been inconsistent this season.