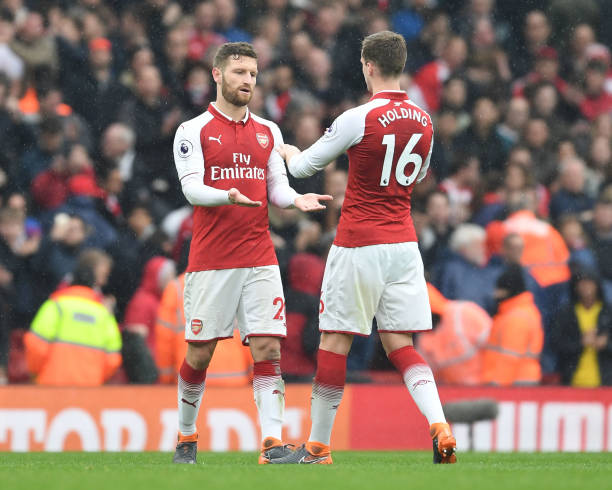 Despite coming in on a transfer fee of about £30million from Valencia, Shkodran Mustafi is yet to impress at Arsenal. He seemed like an ideal defensive signing but the German international has found life very difficult at the Emirates especially this season. The 26-year-old defender is in his 3rd season at Arsenal but he has been heavily criticized this year.

Rob Holding came at Arsenal in the same transfer window from Championship side Bolton Wanderers at a fee of £2million. Meaning the two have spent the same amount of time at the club. Rob was seen as a player the gunners would use in their future back four. Under Arsene Wenger, Holding featured mostly in Cup competitions along the likes of Calum Chambers. Rob at 23 has been challenged to cement his place in the Starting 11 as Unai Emery seeks to find the perfect defensive partnership.

Mustafi has more experience in the top flight football given that he had a stint with Everton and his time with Valencia. On the other hand, Holding has very little experience although its worth stating that he had an excellent season with Bolton before joining the gunners. It would be unfair to compare the two using the game time of the current season because Rob Holding hasn’t made many appearances. Even though Mustafi came under heavy criticism for his shambolic defending, Arsene was adamant to snub the German defender and it seems Unai Emery also trusts him because Mustafi has made a number of errors this season but he isn’t dropping him.

Statistically, Shokdran Mustafi has been better than Rob Holding but we haven’t fully seen what the young Englishman can do because he doesn’t get enough play time and the Arsenal fans hope that Unai Emery tries pairing the youngster with Sokratis Papastathopoulos.

Mustafi is yet to justify his price tag but Unai Emery has started getting the best of him. Rob Holding came on during the Everton game and looked solid at the back and also had a fantastic game against Brentford last night. For now, Mustafi seems to be the better option in the absence of Laurent Koscielny but it’s clear that Rob Holding can also be a great centre back if offered enough playing time.

Why Bernd Leno Has Lost Support Of Arsenal Fans